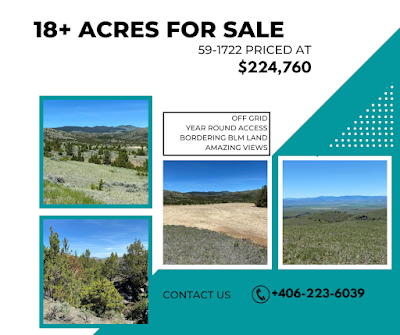 18.7 acres for sale near Bozeman, Montana. Bordering BLM land in the Elkhorn Mountains with off the grid, year-round living on a gated road with elk and deer hunting and a cabin or home site with fantastic views that’s all close to National Forest. It’s for real, year-round property in the foothills of the Elkhorn Mountains near Radersburg, Montana. And it borders BLM land too. Properties like this are extremely hard to find in the Elkhorn's and the views are amazing from the leveled building site that’s already in place. It’s ready to build your dream home or cabin overlooking the Missouri River drainage below and the mountain ranges beyond and have the Elkhorn Mountains right behind you as the backdrop. You’ll see elk, deer, and bighorn sheep right from your picture window and deck as you live out in the hills with Mother Nature. You’re in the foothills where there’s pine trees, fir, and juniper scattered throughout the property along with grasses, forbs, and flowers. There are already several off the grid year-round homes a bit further down the county road in the general area. While there’s a transmission line on the upper end of the property, usable electricity is about 3 ½ miles away so plan on an off the grid system like wind, solar, or propane and get away from the crowds. The property sites on a private gated driveway that’s about a mile beyond Keating Gulch Road which is a county-maintained dirt road. And then you’re only about 3 more miles to the little town of Radersburg and pavement from there. It’s only 10 miles to Highway 287 and the Missouri River from there. Townsend, Montana is only about 25 miles away from the property with gas, food, amenities and fishing and water sports on Canyon Ferry Lake. Bozeman, Montana with an international airport, Costco, Walmart and more is only about 68 miles away to the southeast. So, in just over an hour, you can be from the Bozeman to the relaxation and privacy of the property. And Helena, Montana the state capitol is only about 65 miles away to the north as well. The property and building site are backed up against thousands of acres of BLM lands too so you know you’ve got lots of elbow room right out your back door. It’s such a bonus to have all that land right there you can hike, hunt, and recreate on any time you want. And it’s all just wide-open spaces. The National Forest isn’t far to the west either so you’ve got tens of thousands of acres you can explore and enjoy any time you take a notion. Just hop in the truck or ATV and head to the mountain for fun in the sun or walk straight from the property. This and it’s all out in Montana’s own Elkhorn mountains in the fabled 380 Hunting District where the bulls grow big and numerous. The bull tag is hard to draw which grows the big bulls the Elkhorns are well known for, but there’s also a general spike bull and cow elk season along with various other second cow elk tags that can be drawn for more opportunity year in and year out. People come to the Elkhorns just to see the elk and listen to them bugle and rut in the fall. And your property is right there on the edge of it all so you can take easy advantage. And that’s not to mention the deer hunting opportunity here and more. The Elkhorn Mountains are also well known for their great horn hunting as well with those big shed horns being dropped in the mountains here every year. And with this property you’ll have your very own piece of heaven right out in the Elkhorns where everybody will be jealous of what you have. Don’t hesitate though because a property like this won’t last long. Call Scott Joyner at 406-223-6039 and lock in your future homesite or recreational property in the Elkhorns. Priced at $224,760
https://northwest-national.com/montana/helena/for-sale/bordering-blm-land-building-site-in-place-near-bozeman-montana/

Promote Your Page Too